Life With Hayden: Beaches And Bacon 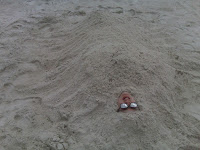 What do the beach and bacon have in common? Nothing really, it's just been awhile since I blogged about Hayden so I figured I'd kill two birds with one stone...

This is how Hayden likes to spend a sunny, summer afternoon at the beach...buried so deep in sand that only the Hubble telescope can make out his head...I had to put up that yellow crime scene tape around him so people would stop stepping on him. And just for the record, when he finally got out of his self-inflicted sand pit, he had sand in places I didn't know existed. 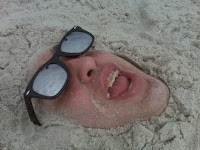 And the bacon? Well, this morning was the first day of school and Hayden's request for breakfast included but was not limited to the following:
Bacon
Sausage
Eggs
Pancakes
Eggos
Cereal
Milk
and Poptarts to take with him
on the 4 and a half minute drive to school...
just in case.
at August 24, 2009

Email ThisBlogThis!Share to TwitterShare to FacebookShare to Pinterest
Labels: Hayden

Gotta love Hayden! This guy is one of a kind and keeps you laughing (and guessing)