Well, okay, that may be overstating it just a bit but I haven't been the mother that I thought I was going to be when we started our family back in 1990.

I'm just saying, as my children get closer and closer to adulthood, my lack of mommy skills has become more and more obvious.

In elementary school, the girls knew all the words to 'Sir Duke' by Stevie Wonder because I played 'Songs in the Key of Life' every morning on the way to school. Then one of them wanted to sing it for the end-of-year talent show. And I let her.

When 'Apollo 13' came out I really wanted to see it, but the girls wanted to see 'Babe' instead so I told them Tom Hanks was a Muppet.

C'mon, have you seen his hair?

One late night, while grazing in the pantry, I came across the box of Little Debbie cakes one of girls was supposed to take for snack the following day and ate half the box.

Okay three-fourths of the box.

Anyway, since it was late and I didn't want to go out to the store, the next day I sent the big box of raisins that had been in the pantry forever.

I know, I know...awful parenting.

But the girls weren't the only victims of my mothering mayhem. Nope, the Graduate got his fair share too. And now as we get closer to his graduation, another one of my parenting plunders has come to light.

The boy has no baby pictures.

Now just to set the scene, he is our youngest child and when he was born, he was the third baby we were blessed with in 4 years. 3 babies in 4 years. And my mother lived 8 hours away.

So taking pictures was not a priority for me. Making sure everyone was dressed by noon was a priority. And knowing all the words to 'Sir Duke'. But pictures, notsomuch.

He did have pictures taken in the hospital and I think there were a few the first week or two when we had help taking care of everyone. But after that, the Funsaver didn't get clicked a whole lot. The next time there was a picture taken of the Graduate, he was five months old, sitting in his bouncy seat on the kitchen table, next to his sister's birthday cake. And the cake was in the center of the picture.

I know, I know...awful parenting.

And all we seem to have is Old Reliable.

Old Reliable is the go-to picture we have been using the last few weeks. It's a really cute picture but tonight as the Graduate was filling out his biography sheet for the church slide show, he said, "We aren't going to use that picture again, are we?"

And all I knew to say was, "Well we could use that picture from your sister's birthday party!" 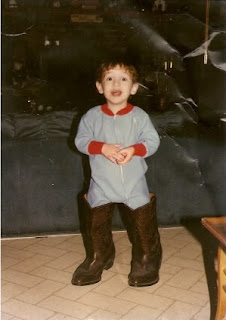 but Old Reliable is really cute...

Ha! And ha! Very funny, Deb. And boy, it does seem like graduation highlights all your mistakes, doesn't it? Maybe that's the bitter in the middle of all the sweet!

Somehow the more kids I got the less they got! Ha! Hugs and blessings, Cindy