Summer days always brings with it vacations and travel time. The Hubs and I have always like to travel and we've always taken the kiddos along for the ride. We been a lot of places and seen some weird stuff so why take you along for the ride too?


Our very first stop, we're going to visit one of our country's most beautiful places,


(Btw, these pictures are scrapbooked, meaning they ain't coming off the page any time soon in the next century so I had to take them out of their album to shoot a picture...)


To set the scene...The Hubs and I had been married about 6 or 7 months at this point. We live in the San Joaquin valley of California, in a growing town called Tracy. Yes, we lived in a town named after a cheerleader. Tracy is located just below Sacramento and Stockton and is about an hour east of San Francisco.


During our first year there, The Hub's parents came out to visit us for a week in November, driving all the way from Florida in their warm, comfortable motorhome. And since they had never been to Yosemite we decided to go camping for the weekend. 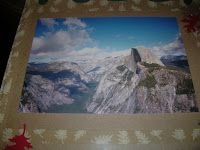 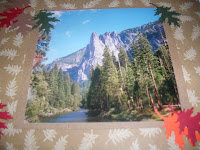 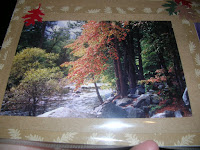 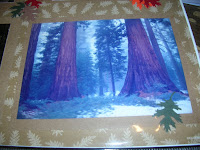 As you can sorta see, Yosemite is a national treasure...from El Capitan, to the Three Brides, from it's beautiful foliage to it's majestic Redwoods... 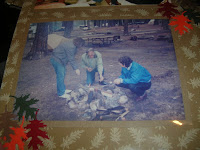 A picture of my in-laws and me around the campfire...good times...their nice and comfortable motorhome just a mere yard or two away...here, let me show you a picture of the inside... 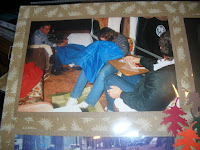 This is the inside of my in-laws motorhome...my father-in-law is sitting in the driver's seat and The Hub's in the black jacket with his back to the camera...


the blue blob? oh, that would be me...
what am I doing?
Well, I'm blowing up the beach float
that The Hubs and I would be sleeping on.
What, you didn't sleep in the warm, comfortable motorhome? 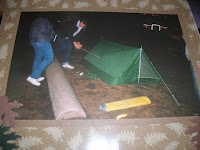 in a pup tent.

That's me looking on as The Hubs puts the finishing touches on our post honeymoon suite. Notice the yellow thing on the ground? I found out a few minutes later that was the other half of our mattress, a yellow beach float to match the blue beach float (The Hubs said he got the blue and yellow ones because blue and gold were our high school colors, what a romantic...sigh).


If you've never met us, The Hubs is 6'4 and I'm a petite 5'10...we ain't tiny people. But we somehow managed to squeeze our large selves into our green cocoon, we even got both beach floats in with us.


I woke up a few hours later, freezing rain pounding the top of our pup tent and the blue beach float completely deflated. I thought about the last words my mother-in-law whispered to me that night, moments before I was zipped into our green cocoon...


"I'll leave the side door unlocked"

Man, I loved that woman.