I think our cat is immortal.


But first let me introduce you to Cookie.
Cookie is our cat and she's crazy.
Introduction over. 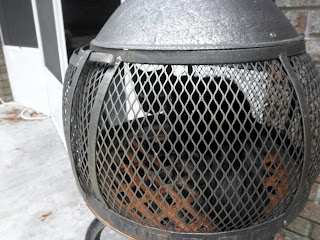 *Disclaimer* Now before someone freaks out and calls the pet cops on us, the door on the fire pit was open, she could get out, the fire pit was cleaned out and it hasn't been used in weeks.

She's crazy because the second you stop petting her, she bites you. I tell her all the time that this isn't the smartest move to make when you're trying to convince someone to keep petting you but she doesn't listen. Because she's crazy.

She's crazy because apparently she thinks she lives in ancient Egypt. She lays around (when she's not sitting in the fire pit) on the hot concrete like she's the Great Sphinx of Giza. Instead of hanging out in the cool, shady porch that's three feet away. Because she's crazy.

Now why do I think Cookie is immortal? Well, she's 17 years old. If you calculate that by dog years, that means she's 119 years old. When was the last time you met someone 119 years old?


Plus...
She's been shot at by a mean neighbor kid.
She's had a broken leg (she did however get to sport a lovely pink and white cast for a few weeks).
She's killed numerous snakes.

And with this zombie craze that's sweeping the country, you just never know.

Now Cookie isn't our first cat. No we had one other cat before Cookie. His name was Tinker. This is a picture of Tinker. He has a toy fish in his mouth because he's playing fetch. Like a dog. 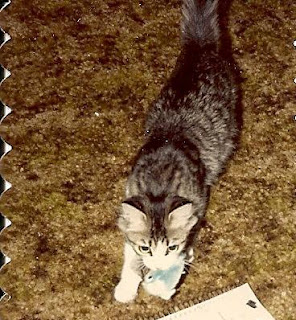 Maybe it's not the cats, maybe it's us.

Oh mercy...Cookie is old and has the right to be CRAZY! Hugs and blessings, Cindy