One of the family's favorite activities we try to do a couple of times during the summer is to head out to our local minor league baseball park and catch a game. We like to go because it's a fun, there's always some kind of giveaway, or contest, they do silly stuff in between innings and sometimes they shoot off fireworks after the game.

And there are hot dogs there.
And some guy brings them to you.
All you have to do is say "Hot Dog!" out loud and they magically appear.

You never have to leave your seat. Ever.

What if everyday life was like that? Imagine sitting on your couch in your living room and yelling out, "Mop Kitchen Floor!" and some guy appears with a bucket and a mop and Waa-laa!

Anyway, we have a really nice ballpark, complete with a fancy-schamancy scoreboard. Although I've had issues with scoreboards in the past this one is pretty nice. 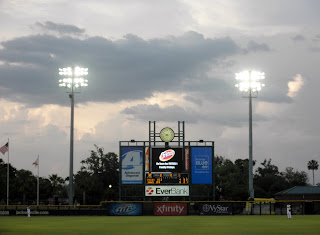 We usually sit on the first base side and we do this because of my phobia of getting smacked in the face with a baseball. My logic for choosing the first base side is really quite scientific in it's theory. My theory? Well, I figure most ball players are right handed and that means any foul balls hit will generally go in the opposite direction. Therefore logic has it that the dreaded, speeding-towards-my-noggin balls of death will go into the stands along the third base side. 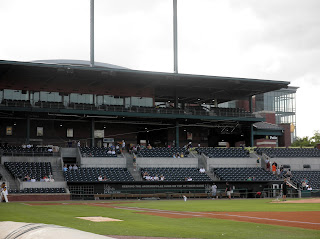 On this particular night however, after insisting to the family that my theory was correct and we would spend an evening safe from the terrors of foul balls, thanks to my theory, I almost got hit in the face by a missed catch between two players who were warming up 20 feet in front of us.

I was never any good at science anyways.

The games are always exciting and the players are very professional... 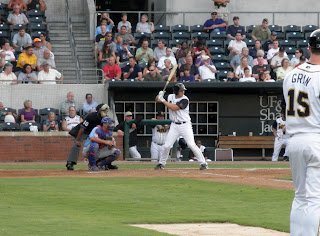 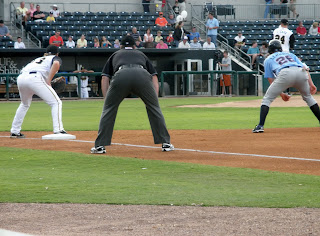 And at that game, we had pretty decent seats... 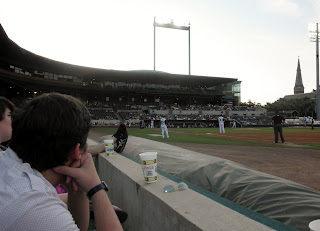 although this was my view for most of the night... 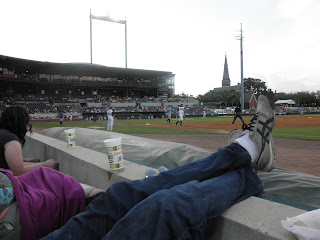 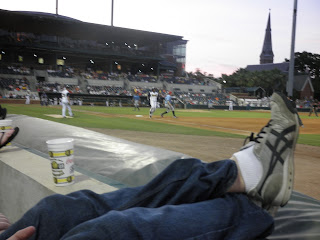 at least he was wearing a pair of clean socks. 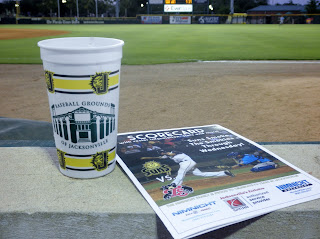