Conversations Around The Table ~ The Father's Day Edition 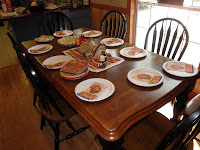 Me: "So, son, how are your canks?"
College gal: "What the heck are canks? Are you talking about cankles?"
Me: "No, I'm talking about his cankers sores. What in the world are 'cankles'. Some kind of bone thing?"
College gal: *sighing* "Cankles are swollen ankles. I told you that the last time we flew and your ankles swelled up. Why in the world are you calling his canker sores 'canks'?"
Me: "I don't know, it's just easier."
College gal: "How's that easier?"
Me: "I don't know, it just is."
College gal: "Well, what would happen if he had cankles at the same time he had canker sores? How would he know which one you were asking about?"
The Graduate: "You could just say, 'How are your upstairs canks?' And if I had cankles, you could say, 'How are your downstairs canks?' That would work."
The Graduate: "And my upstairs canks still hurt, by the way."