As part of my Freshman Composition class, I have to write all sorts of different things, from personal letters to movie reviews. I wanted to sharing some of the essays I'm writing mostly as an exercise for myself, to put my writing "out there" and to learn to trust my abilities. Here's a movie review I had to submit today...I love this movie :)

Dialing Up Love
While it may seem quaint, perhaps even outmoded in these days of Tinder and the swiping of profiles, the movie “You’ve Got Mail” and it’s 20 year old technology still can capture one’s dream of true love being found in the big city. With the Upper West Side of New York City as it’s co-star, this film and its actors check most of the rom-com boxes when it comes to 1990’s movies, with a little drama on the side.
Starring Meg Ryan and Tom Hanks, in their third movie together, with a supporting cast that included Greg Kinnear, Dave Chappelle, Jean Stapleton and Parker Posey, “You’ve Got Mail” was well-timed at its release in December of 1998. The use of AOL and dial up for the internet, and hearing that voice say, “you’ve got mail” when you clicked the little mail box was how most of us got around on the information highway. The muted colors of the cast’s wardrobe, along with the chunky laptops, and lack of cellphones tend to date the movie but they don’t take much away from the charm.
Inspired by the play, “Parfumerie” by Miklos Laslzo, the movie’s screenplay was written by sisters Nora Ephron and Delia Ephron. Nora Ephron directed the movie and the cinematography was by John Lindley. The movie centers around the owner of a small, independent bookstore, named Kathleen Kelley, played by Meg Ryan and her business rival and eventual love interest, named Joe Fox, played by Tom Hanks. The chemistry between these two actors was on full array in their previous films together, “Joe Versus the Volcano” and the mega-hit, “Sleepless in Seattle”. And in this movie, the third times the charm. In most of the scenes they are together in, Ryan and Hanks sparkle, even in subtle gestures, such as Ryan’s character’s hand moving to her shoulder, caressing it slightly after Hank’s character’s hand touches her there.
As the movie begins, Kelley’s sweet children’s bookstore, which her mother had opened 42 years earlier, suddenly has competition in the neighborhood. A superstore, Fox and Sons Books, is to be opened soon and threatens to take out the charming “Shop Around the Corner” bookstore. Parallel to this predicament, Kathleen has begun emailing a man she has struck up a friendship with in a “Over 30’s” chatroom, who just happens to be Joe Fox.
As the emailing friendship begins to blossom and the business affair starts to decline, we are treated to the ups and downs of the main characters interactions; with each other, their temporary significant others, and their other friendships. From Kathleen’s somewhat negative, but supportive co-workers at her bookstore to Joe’s dysfunctional extended family, our main characters find some happiness, dialing into a world where they can share who they truly are, even behind a “handle”.
The neighborhoods, shops, apartments and brownstones in which they live and work aren’t merely backdrops. The loveliness and attractiveness of the interiors and exteriors of the Upper West Side are given their own display case. From sailboats to coffee shops, the cinematography is rich in its use of lighting and direction.
The tag line on the posters for “You’ve Got Mail” was, “Someone you pass on the street may already be the love of your life.” As we navigate life in the digital age, perhaps in our own love lives, a movie like “You’ve Got Mail” can inspire us to take a chance on someone, even someone who puts us out of business. A timely movie set in a time gone by. 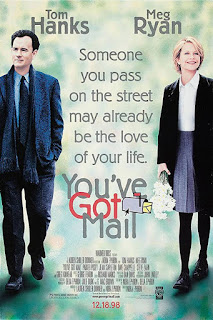